Free vector set including 31 male cartoon characters. They are so inviting and captivating! You must download the whole character set, we guarantee that you will not regret at all.

It’s a small factory for cartoon characters – there are no limits when it comes to mixing the hair, faces, hair, eyes, foots, postures and mouths! All elements are grouped properly so it will be extremely easy for you to create new vector illustrations! Just drag and drop any suitable elements and pop up with something new and unique! Moreover, there are no ninja skills required to do that, so don’t worry if you are just starting with designing vector characters. Some of the premade postures and moods are: happy, sad, amazed,self-satisfied, cheerful, desperate, wistful, pleased, bad, delighted, ashamed, disappointed, thoughtful, frustrated, satisfied, greedy, evil-minded and angry. You know, vector characters are always welcome to all kind of web and print related projects – website designs, business cards, posters, collages, stickers and t-shirts. These male vector characters will surely add positive look & feel to your creative works. And luckily, the whole cartoon character set is available for free download! You just have to hit the “Free download” button at the bottom of the page. And that’s it – you get a high quality set of 31 vector boy characters, fully layered and organized into groups. 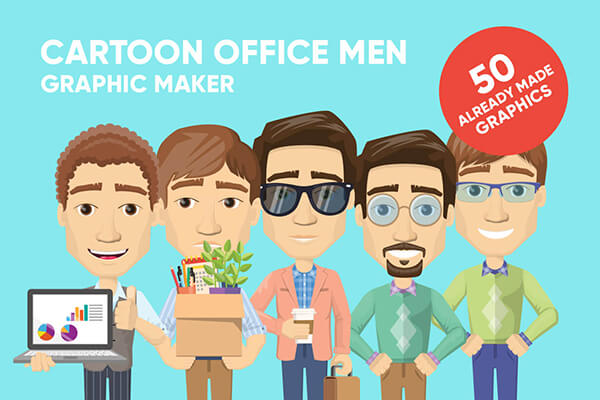